“What do you mean when you refer to the presence of a piece?”

“...I often use the term,   ‘presence’ because subjects often present themselves infectiously.”

“...Often a subject presents itself out of the blue with such enthusiasm that I tremble with drive, in fear that this intensity of presence will fade. I’m guessing this can drive an artist to madness.”

In 2017 I hit a bit of a crossroads in my way of thinking. Maybe even felt a little forsaken?

You see, I’ve always been a bit of a volunteer. I can’t help it.  It’s my arm. It automatically goes up on hearing, “Can anybody help?” But I was beginning to doubt if my efforts really mattered.  It seemed people didn’t want help as much as serving.

Is it really worth continuing as I do? Or should I fall in line driven by shallow trends, Facebook cruci-fictions and whiney banter. Oblivious to the little kind deed we are party to each day. And simply dismissing the purveyor like a servant!

Whilst discussing this with a friend, Paul, I asked why do we bother? He paused, then in a shrugged tone said, “It’s what we do!“

That simple little statement instantly held such clarity and reverence for me.

Then I got to thinking, I bet nobody has felt more forsaken than this guy on the cross. Yet throughout all the suffering, his message was not one of revenge, but of forgiveness.

In this gesture I have tried to capture that forgiveness amidst all that suffering. Personally reflecting either forsaken or saviour depending on personal standing.

During the modelling of this piece, I also had for reference a photograph of a falling swans feather.  This swans feather with its turned up corners held such gentle grace in its fall. And It is this gentle grace and delicate colour I have tried to capture here also.

For all you out there today who takes one for the team and is simply brushed off.  You are not alone.  It’s like my friend said. It’s what we do. We.

A big thank you to everyone for their kind comment in the comments book at Manchester Cathedral.

Especially Wendy from Manchester who wrote, 24/2 so reassuring to know others feel this. A very deep touching piece which gives solace even reading its meaning.

With Imposition of ashes.

I Just wanted to thank all involved for a beautifully heartfelt  moving service.

I would also like to thank Canon David Holgate and Canon Marcia Wall and others involved for the tremendous honour of presenting Forsaken? Psalm 22 in person during the Offertory.

A little nervy for me but I hope my sincerity was well received.

And best wishes to the congregation. 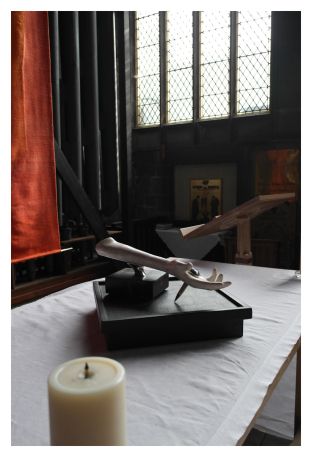 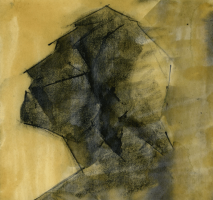 Just a little insight into my process and how it relates to the world around me.

This simple little piece presented itself like an eagle eyed robin, hopping and bobbing. Eagerly spying the turn of each spade of freshly dug soil for food.

Whilst fitting oak flooring and skirting, the off cuts and botched up mitres began to mount up in the corner. And perched on the top was this simple little bird like form taking residence.

From this I modelled in wax, then cast it in pewter Bird Nesting as you see it here.

The presence of this simple little piece nestles firm in great resolve.

Presented to ITIA School of Divinity University of St Andrews. 2018. 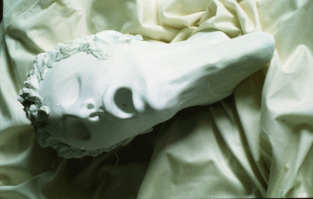 “...Much of what I’m charged to create is layered far deeper than just a form. More-so, a presence.  And at times, that presence can be as vast. Then I wonder how such a simple form or gesture can hold what has moved me to create it. Forming heartfelt sincerity in such a simple gesture can be a real taskmaster.”

Cenotaph came about through what I felt was a need to impose upon our divisions that the freedoms and charity we so brashly take as entitled came by way of united, incalculable loss and sacrifice.

Our freedoms were far from free.

And they are not maintenance free.

Being of the war documentaries era I have always been well aware of this. Utopia would have us whitewash over this history denying all the wisdom and harsh lessons to defend it.

This hand engraved glass slide assemblage of mainly First and Second World War imagery is meant to honour all those who have stood, fought and died for the freedoms we now take as entitled. And bears witness to the unimaginable atrocities of those times.

During the Brexit debate I was beginning to question whether or not we would have the same united resolve and sacrifice to defend our rights and freedoms given our diverse nature. This doubt was allayed during the aftermath of Manchester's terror attack of 2017.

United in resolve,  communities stood side by side in defiance against a twisted ideology that took 22 of our dearly loved ones.

This mass gathering of unity was both profoundly uplifting and humbling. It was unifying and I felt so proud of them all.

Their faith in each other is also honoured here in this piece. This was done by way of an arm bearing the bee tattoo reaching down through the cathedral wreckage to an outstretched arm bearing the heart of 22 at its centre. 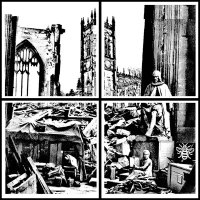 Glass engraving detail of Manchester cathedral during Manchester blitz and present day rising from the ashes.

Originally Cenotaph was meant to consist of three cubes lightly lit with flickering candle/firelight. During casting of the other two cubes, the Grenfell Tower fire broke out on 14 June 2017.

I suppose in some strange way, Grenfell is here also by way of omission. Everything is so much more interconnected than we care to believe.

This piece is now available and open to loan.

I’ve read many times that Alan Turing never got over the death of his first love, Christopher, who died aged 19. And back in those days, to act upon such love in the U.K. was a criminal offence.

Moving along the line, during the Second World War, Alan’s contributions towards breaking the enigma codes were pivotal. And saved thousands, if not millions, of lives.  Potentially shortening the war by as much as two years.

Some time after the Second World War, Alan came to live and work in Manchester, and it’s here the law caught up with a relationship he was having at the time with a younger man. Alan Turing was charged and presented with either a prison sentence or chemical castration. He opted for chemical castration.

Two years later he was found dead in his bed beside a part eaten apple laced with cyanide. It was believed he took his own life. Alan Turing died in 1954, 16 days before his 42nd birthday.

What brings this here to you in 2021 is this statement from https://www.papyrus-uk.org which says, “Suicide is the biggest killer of under 35s in the U.K.”

We have all come through this COVID pandemic both mentally and physically different. Just don’t forget to reach out if you need to, as there is an army of people out there on your side waiting to help you through this. https://www.papyrus-uk.org

And for the rest,  just don’t forget time to be kind. You may just save someone’s life. 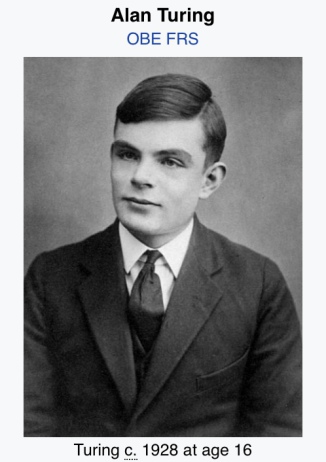 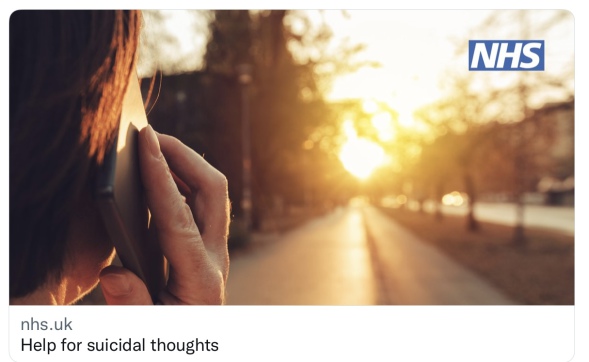 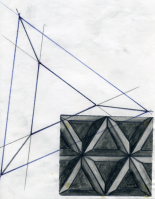 A tribute to Alan Mathison Turing

Ring tray is meant to be held by the ring bearer/s at the altar.

Half part eaten apple in resin.

This little figure from The wheel of mourning/bereft (below) was my way of expressing the presence of absence emotionally. But it has been taken so fondly to heart by so many as a symbol of loving memory. And a loving presence at hand.

I am no authority on bereavement beyond that of my own experience but I believe much of our past rituals and beliefs were.

The need for ritual and beliefs are hard wired as a condition of our nature. And we rationalise them by way of continually re-branding. Or until the day we psychologically sanitise to the point of psychosis.

Who needs Christmas, Father Christmas and the tooth fairy? Other brands of hope, good will and magic are available!

I endeavour to draw from between the lines of our beliefs and rituals to present a more faithful human experience. One that is felt more than understood.

This piece runs along side The wheel of mourning/bereft and cenotaph. 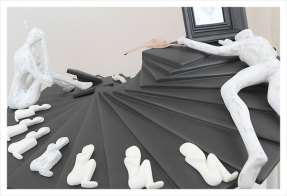 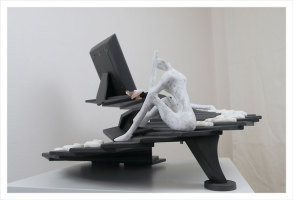 When I was asked by Dorothea Stockmar, German writer

and artist if I would be interested in producing a work around her latest book The Wheel of Mourning, this came to mind.

A grief-stricken home. A mother, a father, sibling and the echo of an ever present absence. All momentarily frozen here in time. And very much  like the human casts of Pompeii from which I took inspiration for these forms.

A mother of deafening denial with an upturned portrait at her feet has her back to  a displaced sibling. And an exhausted father with his son, the fallen , to hand with a leaf from the cherry blossom tree they all planted.  The fallen.

The echoing sibling figure is the ever present absence that surrounds us.

Live for them so they live through you. Ever present.

Live for me. Love you.

Presence of their absence is a meandering process of discord and harmony.  Grief adrift  time if you like.

The pendulum Tempo is set at 60 and runs for just over seven minutes.  I’d hope that I have left  enough scope for others to occupy it with their own musical improvisations, thoughts and imagery of the given subject. 108 bars. Written on StaffPad for Ipad. Music score on request.

Particular attention has been made to the soundscape of  instruments subtly resonating in the background of this piece.  And either headphones or a stereo system may better convey this.  Or add more bass and less treble as the reverb is cold and harsh. 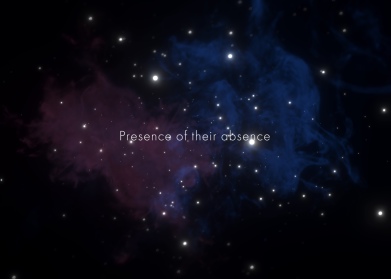 DOROTHEA STOCKMAR. About. • German writer and painter living in Celle and Berlin. • death and grief counsellor focusing on symbolic-creative impulses for healing grief. • trained in the field of Art Therapy.

“Dorothea Stockmar’s book of symbols reflecting grief is the
fruit of her being both artist and bereaved mother. It is full of
helpful insights. When grief is unspeakable in words,
common symbols and metaphors can help to express
personal anguish and, sometimes, give glimpses of future
hope. Dorothea’s chosen symbols voice her own experience
and are deeply meaningful. They will also prompt each
reader to reflect on their own unique collection of symbolic
images of loss and hope. The book can itself be a compass
and companion on the long and arduous journey of grief.”
Dr. Margaret Brearley

The Wheel of Mourning by Dorothea Stockmar. 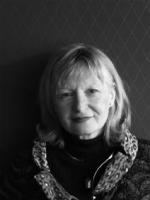 Where to purchase The Wheel of Mourning-Grief-Relief by Dorothea Stockmar: 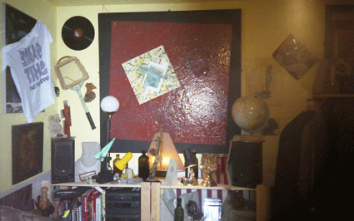