Now We Are Free

This brutalist structure in cement was sparked by a sketch that instantly came to mind whilst listening to Now we are free from gladiator by Hans Zimmer. Sung by Czarina Russel.

Now we are free by Hans Zimmer. Sung by Czarina Russel.

During the construction of this piece I was strangely wary not to take on board the film in fear I may elaborate. And still I haven’t seen the film.

What did contribute to the presence of this piece was my response to something a friend once said.

“ We are often not as we would like to be, but as others make us.”

Maybe so, but not everyone was party to your making. There is good and bad on all sides. It’s our efforts that are often misplaced and party to our demise. Endeavour to tread kindly for yourself if not others.

Every item in this two drawer assemblage holds deep rooted sentiment in all its stages. From childhood to present day.

What sparked this piece was the deep sense of betrayal many of these items can impose upon us just thinking about passing them on.  It hurts as much to keep them as it would to give them away. So we put them away until, I suppose,eventually down the line sentiment eases. A worthy cause? Perhaps value becomes a lifeline. Or you die.

When my sister died, aged 32, her mirror became my mother’s most prized, heartfelt possession. As did my mother's spectacles to me.

It was the day before Mother’s Day. My mother was in hospital. I removed her glasses and she asked, "what are you doing?"  "I’m cleaning your glasses. I’m not having my mother with fingerprints all over her glasses". I wiped them and affectionately put them back on her. My mother said gently, "it doesn’t matter".

The day after, she died. I must admit, some time later I found myself drawn to look through them to somehow draw from that very moment she looked at me through them, and it was so deeply heartfelt; as I’m now sure my sister’s mirror was to my mother when she looked into it.

Although we draw deeply the past from these things, it’s not so much the things we have of them that define us, as much as it is the life we live for them. You live for them as they live through you. It’s ok to enjoy every moment for them.

Of course there are still very dark days ahead.  I don’t believe loss gets easier as much as we learn to live around it, but since assembling this piece, the mantra, it’s ok. live for me. love you,  plays throughout my memories of these items.

Live and love for them as they live through you.

Strangely enough, when I think of primary art, what springs to mind is a red ochre spattered handprint of a caveman, woman or child. From that comes to mind a child's wire frame drawing of home with its rectangles,  squares and triangle of sorts. And on the surface, both so beautifully primary.

I must have been around five years old and although it was dark out, it must have been summer time as I wasn't too cold. Maybe 00: 30am. My mother was spurring me and my older sister on to race ahead down the street. We were all being chased by a man with a knife. My mother's drunk of a partner. So easily we could have safely raced ahead but for the tether of concern for our mother between us and this desperate situation.

Hopefully the tethered rigid tension and angles of this little figure standing ground presents a sense of great urgency and concern. like the caveman and child, I strived to convey the human experience in me but without my usual surface embellishments. Again, on the surface, so beautifully primary.

Back to the drunk with the knife. We did all get away safely as an approaching police van sped up to arrest him. My mother did say that on visiting him the next day at the police station, he was black and blue. So make of that what you will. 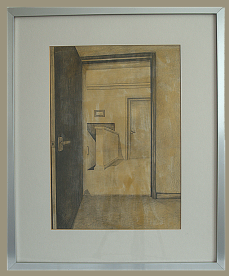 "Our creativity is drawn as much from the subconscious as it is the conscious.  Subconsciously it is at it’s purist form.  It’s not diluted in translation by rational construction.  Creativity in It’s purist form.  We are taken by purity without thought. So why create an artist statement for a piece?  I do put immense resource into my statements.  It’s not as much about an explanation of the piece as it is the journey of its conception.  I’m the Biographer,  not a therapist. "

I was walking down the highstreet and just ahead of other pedestrians was this lone pigeon desperate not to be stepped on. At first people were almost taken to kicking it until noticing it was hurt, then they almost become concerned. I know of a similar situation concerning rough sleepers, homeless and so on that we only afforded our compassion on their demise.

In this piece, the cold rough sleeper seeks refuge in a casket which represents the charity he would receive if he was found dead. Maybe!

A bit extreme I know, but for one reason or another these days it has to reach such a point to just warrant our attention let alone our compassion. And then it's short lived. I suppose with all the  scammers around we become a little cynical.

But let's not end on that note. If you're not sure but would like to help, maybe take a look at https://www.bigissue.org.uk/ Even buy it from a vendor from time to time.

Google organisations similar to http://www.barnabus-manchester.org.uk. Or http://www.shelter.org.uk/ and so on.

Strange as it may seem from a (so-called) none believer that it so deeply saddens me to hear of a good lifelong believer starting to doubt in their faith. I so much want to assure them. But I cannot. So I lend a shoulder to lean on and say nothing of my own standing on such issues.

This piece is in response to such persons of latter years. And a couple who lost children.

Pilgrims' relic started out as a sort of rosary. It’s meant to be handled. Pondered upon. And represents faiths mortal journey. From beginning to end. I suppose the key elements to this piece are the head of the virgin mother haloed at the top of the cross structure.

The bundled figure lower down represents baby Jesus wrapped in Swaddling clothes and the body of Jesus bound in linen cloth held firm to the cross. And most poignant, the skeletal mortal presence in its every challenging twist and turn that is the pilgrims' relic of the people who sparked this piece.

Pilgrims' relic does have a sense of the nativity about it. And this is probably due to a couple of occasions where people have expressed loosing faith due to the loss of a child.

In my youth the first thing I headed for in my local museum was the Egyptian mummy. I never imagined  a dead person. I used to look at the face and think, that person used to eat, drink, talk in a strange language. Have a family. They used to walk and go about their daily life as I do now. And as do their descendants  right now. It was like looking at yourself in the past.

The angel to the right, a rebirth. And the black totem of sorts to the left representing two dreams of rebirth. One being my own.

The tree/branch side of the totem is my dream.

At the top of the tree is a light (hole)

Up the tree on a branch is a figure (my uncle)

My uncle Kenny didn’t believe in god and said as much many times. On his death I dreamt he was up a tree surrounded by complete darkness but for a spotlight above highlighting him, the surrounding branches, base of the tree and me.

I looked up at him and asked,

“ Well, there is something!”

And that was it.

The heart and the fish side of the totem is a dream shared with me so isn’t mine to tell. 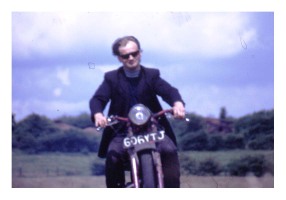 Hope is the light around darkness waiting.

I’ve heard so many people say they don’t believe in god but believe there is something. I sense it's hope. Hope is the light around darkness waiting. And that’s my spin on this piece.

This picks up on the bombardment of some so-called believers I knew whose faith was almost venomous elitism. Hell and damnation for the none conformist.  You’d think venomous elitism was more a trait of evil not good, wouldn’t you? How I felt last Monday